With a wet long weekend looming over Brisbane I thought I would do a post about wet weather camping. We all have that horror story of a time that you went camping and it was washed out due to a storm or heavy rain. These are the stories that come out when chatting to fellow campers after the sky has turned black and the first drop falls from the sky.

Brendon and I have definitely had our fair share, but as the rain falls this weekend I recount our most recent experience. Firstly, I would like to explain that currently our set up is basic, nothing fancy, just a swag, an awning, couple of chairs, a roll up table and kitchen in the back of the truck.

Last Christmas we packed up and headed to Fraser Island our favourite spot in the world, we knew the weather was not going to be average for the first few days but then clearing as the crowds were returning to work. In the interest in trying something new we set up camp at Coolooli Creek camp ground as the sun set. We drove up and embankment and proceeded to get everything set up, the wind picked up there was a mad rush of fellow campers tying things down and extra guy ropes being smashed into place.

As the rain and wind worsened one by one campers nearby began to retreat to the safety of their beds. 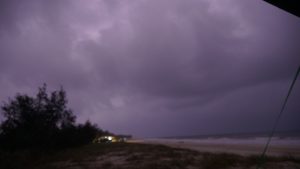 We could see the nearest neighbors a couple and their friend who had a rooftop tent already setup trying to setup a smaller tent for the 3rd person, they struggled to get it up which was a commendable feat. The wind however blew it flat. They would push it back into shape for 15 minutes or so before rolling it into a ball and jamming it in the ute canopy. The third wheel slept on the back seat of their dual cab that night.

As the weathered worsened further the wind whipped at the vehicle awning furiously and it no longer offered protection to our camp chairs from the sideways rain. So, we decided to pack up the chairs and awning and to retreat to the warm and dry safety of the swag. We watched the wild lightening through one of the ends of the swag for hours eventually passing out and did not wake till after 10am. When we got out too survey the damage to my surprise and to this day I don’t know how our pop up ensuite tent was still standing there, proudly surviving the wild storm.

Then we looked along the beach to see it was then we saw the tide was that high that it had been under the swag and nearly to the creek behind us. I’m now not sure if it was exhaustion or gentle rocking of the swag floating that accounted for the big sleep-in.

It had been a king tide overnight, not being our normal campsite and setting up in the evening light we didn’t realise exactly how high the water had been. Or was going to be.

Nearly all of our neighbouring campers in the morning were packing up to beat the tide before the track was cut off at the next creek. It was apparent that most of them had encounter some sort of damage to their property and it was sad to see so many people heading off. We were fortunate that nothing of ours was broken in the storm except the mattress on the swag was a little water logged. We decided with the height of the tide and the weather predictions we would head back over to the eastern beach for a couple of days.

As we drove along the eastern beach we saw the aftermath of the storm with broken gazebos, tents and other gear being dropped off at the rubbish disposal points. It was sad to see that so much damage had been done to people staying all over the island but hopefully it didn’t ruin their experience too much and they still enjoyed their time on the island.

We all know tips about wet weather camping here are two of mine for when you are caught in the middle of a storm or are expecting one.

If it’s not essential pack it up and store it away. The less stuff set up the less there is to be damaged.

Secondly and everyone says this, when you get home or the suns back out, dry all your gear out and then repack it. If you have been near salt hose it off if you can and do this to everything that is suitable as it stops rusting, mould and general wear and tear on your items.